Phase noise problem for use general kind of GPSDO.

Cross posting this from the Yahoo group mailing list so that it does not get lost in the sands of time, as it is valuable discussion worthy of preserving:

Rob, you're correct that the ANAN and other HPSDR radios use a PLL to
lock their internal reference to an external source. More precisely,
there is a very low phase noise 122.88 MHz VCXO that is locked either to
an internal 10 MHz TCXO or external reference.

But an important note on external references with the HPSDR radios. A
few of us have tried to use Hermes-based radios for precise frequency
measurements and have discovered that there is an issue in the PLL
circuit that results in phase jumps at random intervals (usually in the
10s of seconds apart). These are severe enough to destroy sensitive
measurements. I think they are inherent to all the radios that derive
from the Hermes schematic and firmware.

After experimenting we've found one fairly simple fix that at some point
Phil will put into the production firmware. But even after that fix
there is a problem (though of much smaller magnitude) that I haven't
been able to track down yet. As I have time I'm continuing to work on that.

This problem doesn't affect phase noise or real-world frequency
stability, but does show up in sensitive measurements as random "ticks"
in the transmitted phase.

On the Orion MKII based hardware, I believe the 122.8MHz oscillator is a Crystek CVHD-950 (click the hot links in this post for the datasheets), with the following advertised phase noise performance: 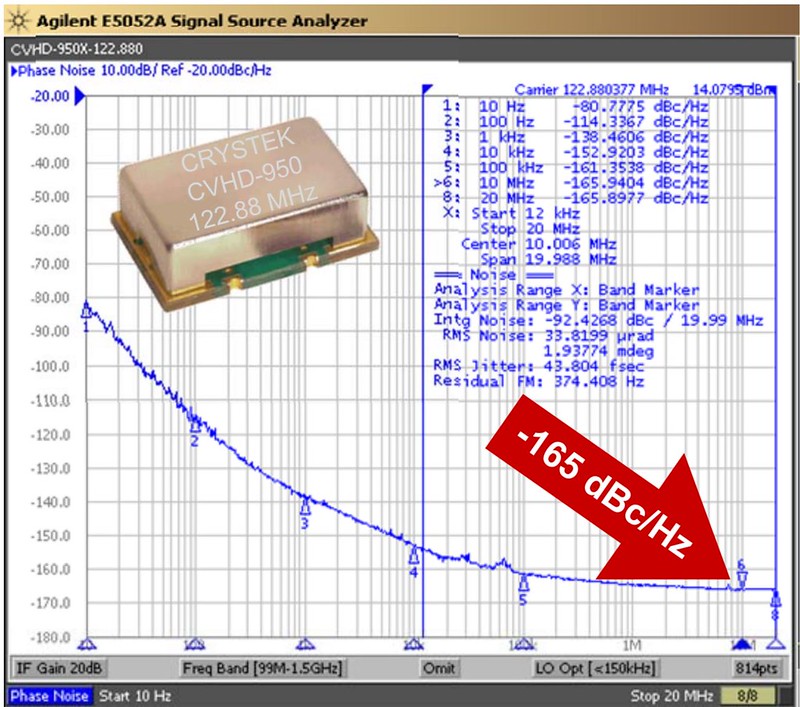 The on-board 10MHz TCXO I believe is a Connor-Winfield M100F with the following advertised phase noise performance:

With respect to appropriate input levels for an external reference, I find that anything between +7 and +13dBm works. Below +7 I've observed inconsistent performance. Levels above +13dBm could put the input differential amplifier circuit at risk for damage.

Here is a snippet of the schematic showing the external clock input and automatic selection circuit.

Next up is a sine to square wave converter formed from a two-transistor differential amplifier. This allows the use of either sine or square wave external clock sources. The resulting square wave goes to IN0 on the 74LVC1G97 which acts as a switch.

The same logic level on IN2 also is applied to the gate of Q1, and when high due to the presence of an external clock, will drive the P-channel FET to cutoff and turn off power to the on-board TCXO.

As for the firmware PLL problems that John mentions, I looked at the code and all I can tell you is that the code uses the standard Intel (nee Altera) "altpll" megafunction. You would think that a standard megafunction would be bug free?

I'll be very interested in whatever measurements you are going to make, Rob.

I have an ANAN-100B (Hermes) so am going to add an auto-select/buffer board (w7ay/Kok Chen Hermes Reference Oscillator with no OCXO loaded) to my radio before attaching it.
*************

Thanks for the info on the "new" BG7TBL unit

CTS is a fine company and that OCXO probably has some good spec's. It's so old I couldn't find a data sheet online, but if you called CTS I bet they could dredge one up for you.
Top

Here is another option for anyone who wants to make their own GPSDO. We currently use the RF zero board as the EI 6m beacon and I use the carrier to calibrate my TX in OpenHPSDR/Thetis , not 100% accurate of course because of doppler over the air but I've checked my TX against friends who are GPS locked and its right on the money.

From WA8TOD "I have breadboarded the RFzero together with an ADF4351 evaluation board. For frequencies up to 200 MHz I can use the RFzero directly. From 200 MHz to 4.4 GHz (yes, you read that correctly..... GHz!) the RFzero supplies 25 MHz, GPS-disciplined reference to the ADF4351. Everything in the picture, including the kitchen cutting board base, cost less than $100." Looks like fun for the experimenter. But quite a rat's nest! Once you add in real packaging the price is going to come up, and for $125 or thereabouts you can have a nice BG7TBL clone or even Leo Bodnar's entry level unit, and either will probably be more reliable because the parts count is so much lower.
Top

True Scott but bear in mind its a lot simpler with less parts and cost for freqs less than 200 mhz , its basically the RF zero board @ $75 plus a case and display if needed.
Top

Tony EI7BMB wrote:True Scott but bear in mind its a lot simpler with less parts and cost for freqs less than 200 mhz , its basically the RF zero board @ $75 plus a case and display if needed.

So the output is not 10MHz?
Top

Yes it can be set to 10mhz or any freq required , more info here http://www.rfzero.net/
Top

So similar to this, then? 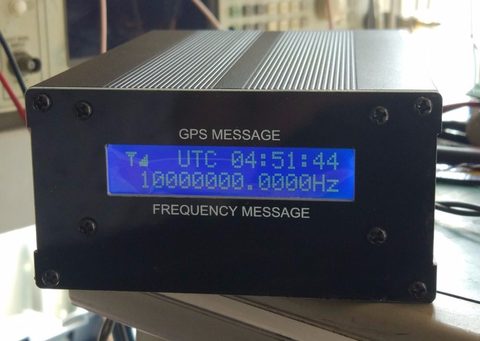 Nice! Did you get it yet? Curious to know what kind of OCXO it uses.
Top

Thanks Scott, just ordered so 3/4 weeks I guess . I'll take a look and let you know when it gets here.
Top

Unit arrived today and works fine after I made up an external mount for the supplied GPS antenna. Have not had time to look for the OXCO type so far as I've been monitoring the EI0SIX beacon all day. Nice display too

200 microHertz error. How on Earth do you find that acceptable?

LOL guess I'll have to live with it

Does anything need to be change on a 7000 MKII to use an external GDPO 10mhz reference signal into the back of the radio?

Thank you, this would be a nice add to the manuals.
73
NI0Z
HTTPS://SDRZONE.COM
Top
Post Reply
82 posts