Tonight the 10/12m output really started to fall off. With PA settings maxed out (38.8) 12 meters outputs about 70 watts, 10 meters about 45 watts both peak reading. All other bands will adjust all the way up to 200 watts if desired, 6m included.

After some reading about how the filters work, I decided to set Alex to manual and set the 10/12m LPF lower frequency to 29 Mhz. Bingo! Full output on 10/12m.

So I got curious if significant losses thru the LPF was normal. I wouldn't think so. But why not check. Checking the other bands it appears that there is no noticeable loss of output power thru the LPF.

This leads me to believe that there is a component on the 10/12 LPF that has been slowly failing and is now probably quite bad.

Has anyone else seen this previously?

One last question in regards to 6m PureSignal operation. In order for PureSignal to work on 6m Alex needs to be off. With Alex on during 6m PureSignal two-tone testing, PureSignal just cycles continuously. Turn Alex off and PureSignal works great.

Again, is this normal? Or another indication of a failing LPF band?

Thank you for your time,

Check the fuse holder and fuse on the power cable. See if there is any visible thermal damage.

Thank you for the reply.

Everything in the power cord looks normal.

Based on your other recent post, I have no ground at RX2 during transmit. Actually nothing ever seems to happen at RX2 RX or TX. I'm going to assume it's a Rev24 board.

I have been searching for schematics for the power amp/filter board. Not so easy to find if they are out on the web somewhere. Are they here on Apache-Labs site?

[EDIT] I found individual schematics. Mainly looking for Alex TX filter values. I'm assuming the component values in the filters are the same on the 100w Amp/filter board.

[EDIT #2] Found the schematics here on this site. Thank you!

Which version of the firmware are you using? There was an issue with the early ANAN-100 units where the wrong filter was selected. There was a firmware version (on the Apache site as I recall) that addressed that issue. I use it on my ANAN-100.

Right here in the release notes:

Back in 2014 when I first had my ANAN-100 there was an issue with low power output on 12 meters if the firmware version that was released for the TAPR Hermes board was used with the ANAN version of Hermes. Typically, within a few days of a firmware release Abhi would re-map the LPF in the firmware to direct 12 meters through the 17/15 meter LPF and then release it as the "b" version. Below is a brief note from Abhi responding to my question about the 2.7b release:

(April 19, 2014) I noticed version 2.7b on the site this morning but haven't seen any discussion here about it. The link at the Apache Labs site does say it's for the ANAN-100 and ANAN-10 but I just want to confirm that it's the updated firmware with the correct band filter settings.
Thanks,
Rob W1AEX

It looks like the v3.2b version is modifying the way 15 meters is mapped to address a low power output issue with the 15 meter band:

You'll find Hermes v3.2 and v3.2b at the GitHub site if you want to try both LPF mapping versions but it won't affect your low power output issue on 10 meters so It's probably not worth messing around with.

Ed, as you mentioned in your original post, the low power output on 10 meters does lead to some suspicion that the 10/12 meter LPF may have damage to a component that is pushing the LPF cut-off point above its intended range. I'm not certain at this time if the LPF low and high points are still user adjustable in OpenHPSDR mRX PS when you select "manual". Those values don't actually modify the filter, they simply dictate when each filter is switched in. Again, assuming the LPF values can still be user adjusted, I'm also curious what happens when you set the default (22 MHz) lower value of the 10/12 meter filter to 29 MHz. Assuming that the values you change in that table actually can override the firmware, what happens when you transmit on 12m or between 28-28.999 MHz? Is the ANAN-100 transmitting without any filter at all because the range for the 12/10 meter filter has been manually set to switch in between 29.000 to 31.999 MHz? I don't know the answer to that but it would be worth taking a look at your harmonic output with a separate receiver if you plan to use it that way!

Regarding what you are seeing with PS on 6 meters, if your ANAN-100 is not a Rev 24 model and has the older PA board, then the ALEX HPF setting definitely has a big effect on the level of internal cross-talk through the PA board relays and can alter the way Pure Signal behaves. The easiest way to correct that is to do the simple re-cabling modification inside the rig that Bill - KC9XG came up with. It cleans up the internal cross-talk very nicely so that the older ANAN-100 works as well as the newer rev 24 rigs.

Wow, Great stuff. Thank you all.

How I found the issue was by doing just as I think you are suggesting. I suspected from the beginning an output filter issue of some sort. So I moved the bottom of the 10/12m LPF from 22 Mhz to 29.7Mhz. Then selected manual. It did take me a minute to grasp exactly what was going on. As long as I stay out of that filter output is all good on both bands.

I saw the sticky post about identifiying which PA/Filter board you have installed. I checked the RX2 center pin to ground during both transmit and receive and saw nothing. Unless I read the post wrong that should indicate a VER24 board.

I dont' have any issues popping it apart when I have some quiet time. Already fixed a few things and played with the Version 2 firmware. I'll get in there, test what I can in circuit, positive ID the board and look at the aforementioned modification.

Thanks again, Will report back when I know more.

Obviously no change to 10m. I'll be cracking the radio in a few mintues to take a better look.

It shows me that my 12m-10m filter section has a problem
maybe overheated inductor or something else .
So I ask for advice : should I open the rig and have look , which components are the most prone to fail ?

Its it easy to access the PA-Filter Board , and to obtain the parts for the LPF ?
Is the circuit diagram and parts list for the 12m-10m LPF circuit available ?
Thanks a thousand times for your useful comments and advice .
73! Pierre GROS F6IES
Top

Taking apart a 100 or 200 series radio is tricky. Sadly there is no video tutorial that I'm aware of. Remove the front panel. Very carefully unsnap the power switch from the front panel button--do not use tools on this. Remove the the rear panel screws and BNC nuts. Drop the rear panel. Label and remove the connections between the bottom plate and the PA/RF card. The PA/RF card is hard mounted to the chassis and will not slide out. You have to finagle the shield plate and bottom plate out of the chassis to get to the PA/RF card.

Photo of an older 100D disassembled...the 200D will be almost identical: 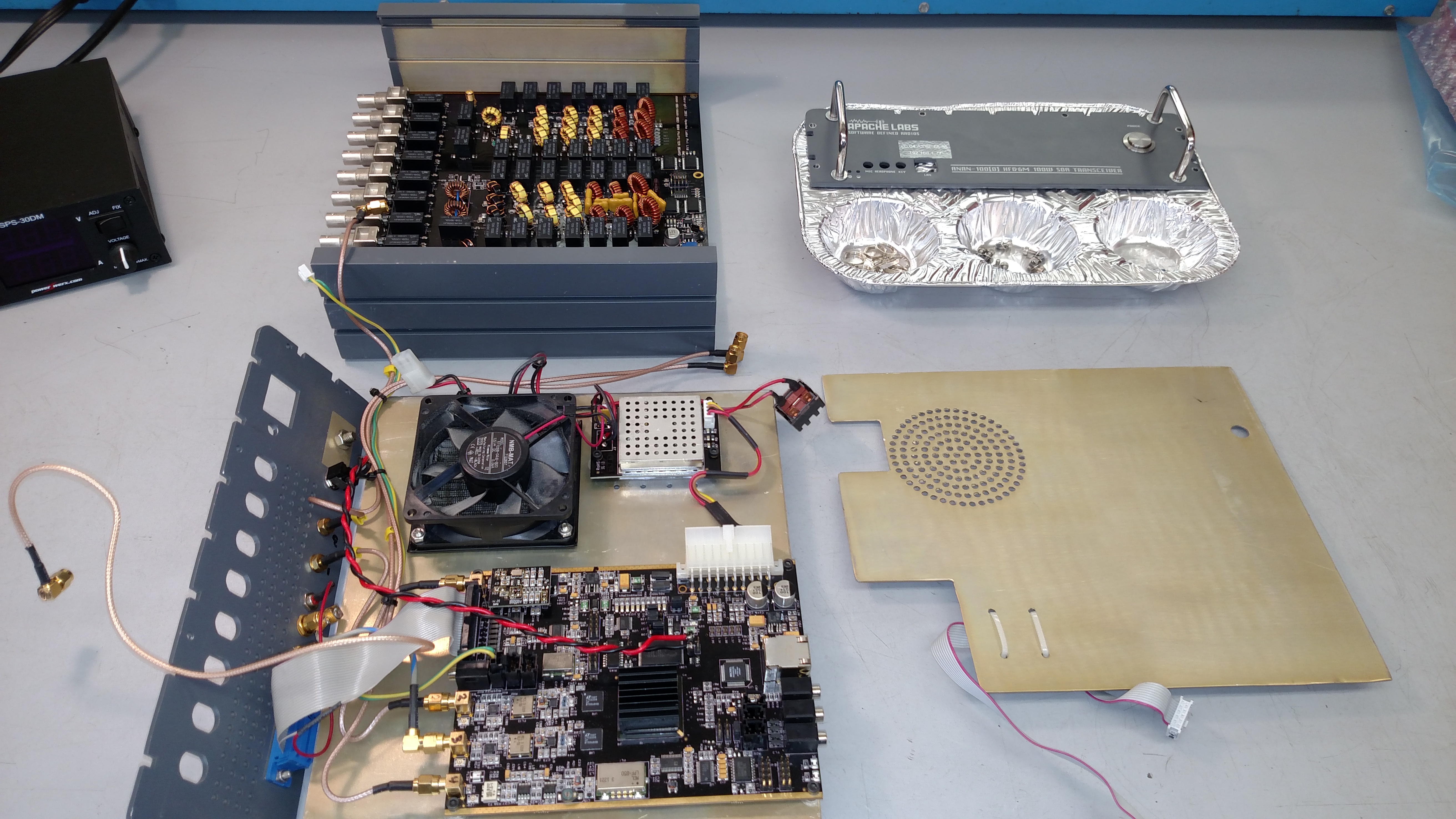 I did just that and Bingo , ( see picture)

There was a blown capacitor C88 and L15 's toroid color had changed from yellow to brownwith the wire insulation gone !
So I changed the capacitor to a 500 V 180 pF and rewound the toroid after repainting it and reassembled the radio . tests are OK now all bands work full power in their proper range although 12m remains a bit below 100 w which is strange . (probably i should change the L15 toroid but I don't know where to get those ).
Thanks , all your posts have helped me greatly to figure out how the filters work and to take the magic away from " ALEX"
73 ! F6IES

Now that's some old time hamming right there. Taking your radio apart and fixing it. Not too many hams can do that anymore!

Glad you got it fixed

I didn't find any obviously over heated parts in the LPF. Testing components in circuit didn't yield reliable results. So I simply replaced all of the capacitors in the 10/12m LPF. That restored power output for 10 meters. Actually 12 meters could be made to function correctly with the 10/12 filter instead of pushing 12 meters down to the 15m filter in the setup. I used 500v capacitors in all locations.

I also found several low value resistors in the amplifier section that were clearly smoked and had changed value. They were replaced as well. Idle bias was then re-aligned.

Thank you all for your assistance,

Shortly after fixing the 10/12m LPF I was doing some additional testing of the power amplifier. Much like the 10/12m filter previously, the 6m meter LPF appeared to be acting up.

Back in I went. Visual inspection found that all three of the 6m LPF, L22, L17 and L18 were resting against one another. This would normally be a bad thing.

I removed all of the three inductors and checked their values. All indicated they were good. All of the caps were checked. They appeared to be good.

I then re-installed L22, L17 and L18. This time I repositioned their leads so that there was enough play in them to reposition them so the inductors wouldn't be resting on one another. This actually took some time.

I reassembled the radio. Now a gain setting of 42.7 db achieves 100 W output across the 6m band.

Just an FYI - I had reported a good bit ago, maybe 6 months, that I had issues with PS working on 6 meters. Turns out I had to have ALEX off. There was a bug, at least for the 8000, that Doug confirmed in testing. I don't know if anything ever came of it but I've run with ALEX turned off from then on, on all bands.

[just trying to remember additional details - there was also an issue with signals appearing on 10 and 15 from 20 meters. One contest weekend 10 'came alive' ... turns out it was stations on 20 that were as 'weak' as S9 on 20 that were clearly there on 10. If I recall again turning ALEX off solved this. It would have been reported here on this forum... I'd need to go look for the details.]

That was from an ill-fated attempt to have the 6M pre-amp work for 10 and 12 meters as well. I don't remember which version of firmware that was, but I had thought that version had been withdrawn from the TAPR Github repository. Not sure, though.