Hello,
I finally got the xmit audio using VAC. When the rig xmits, I see what I call glitches almost every time the WSJT-X
changes tone.
I see a nice clean tone on the screen, and then something happens (a tone change?) and the 60db clean signal changes
to a 30db signal with junk below it on either side. It last for a fraction of a second then cleans up.

Should I worry about this?

I see this also, Glen. It only seems to happen in WSJT-X, regardless of mode. I can run MMTTY, Fldigi, WSQ and a variety of other digi mode apps and not see the same problem. This is not to say there aren't occasionally dropouts evident in all cases, but not that very reliable noise burst you see in WSJT-X. That tends to point the proverbial finger at WSJT-X.

It never seems to affect my ability to complete QSOs, I've been meaning to take a more careful look at the issue but it's not high on my list of current projects

It would be interesting to compare Muzychenko VAC to VMB. If it still looks like that, then I might try feeding the stream to some DAW software, recording it, then look carefully at the waveform in the time domain to see what's going on.
Top

I've not checked to see if this is the case - but I can tell you the TX waveform when using SSB jumps a good bit IF the NB/NB2 is turned on. So if you are running this and either of these are on I'd try turning them off ... if indeed this is the case if you would report back so we know it also applies to TX using DIG/VAC.

Obviously one should not be using any NR, NB or EQ when running digital. And in my case I am not, so that is not the issue.
Top

Thanks guys. No, no NR nor NB. OK, I will not worry about it. I have not tried another digital program yet.
73
Glen K4KV
Top

Oh, one more thing. I was using VMB but I was urged to try Muz VAC program, which is what I am running now, when I could not get the
tx to work. I will let someone running VMB tell us if they also notice the glitches...
73
Glen K4KV
Top

I run VMB almost exclusively, and the glitches are there as well. More evidence it is an issue with WSJT-X.
Top

Like NB2 had no bearing on the TX display - as stated by you - until you TRIED it and found indeed it DID have a bearing!

Since I hadn't a clue, nor did you, whether or not Glen HAD it on - or for that matter if it would affect it AS IT CLEARLY DOES on SSB, I think it was important to ask the question. I have since checked it and it appears the BUG with NB2 on (DUP has to be on) when transmitting on SSB is not there when using DIGU. Now we know - no clairvoyance necessary.

I am using VAC-M with of course WJST-X and am not getting any jumping around. Therefore I do not believe it is WSJT-X.

K9RX wrote:I am using VAC-M with of course WJST-X and am not getting any jumping around. Therefore I do not believe it is WSJT-X.

Would you be willing to share screenshots of your VAC-M, PowerSDR and WSJT-X audio settings so that we can copy what you did?

Happy to - not sure which screen shots would be necessary though. We've got Audio Primary set at 2K/96K; VAC using WDM-KS and set at 2K/48K. Buffer box checked and set at 120mS (default?). In WSJT-X there's nothing to set other than the VAC cable #.

but let me know which panel and i'll get a shot of it.

Just a follow up to the glitches here. I have not really been able to make any weak signal contacts in FT8using Muz VAC.

I changed to VMB from Muz VAC, and xmit much better, but still glitches some. Now will try some weak stations...

That's a big difference right there! I'd be willing to bet that most of us are running a main RX sample rate of 192KHz. I'll have to try that and see if it makes a difference.
Top

I ran some tests using Tune on PowerSDR. So nothing to do with WSJT-X or any virtual cables.
First thing is you'll see the "glitch" just by adjusting the Drive. So this is all edge effects on the FFT from dead space.
Turned on Tune and then capture the audio stream from PowerSDR to the rig via rawcap.exe
http://www.netresec.com/?page=RawCap

Then looked at the packet interval times first by finding the port# being used using windump
windump -n -r dumpfile.pcap |more
Use the high port# e.g. 56696 matched to port 1024
windump -n -ttt -r dumpfile.pcap dst port 56696 >dumpfile.txt
You can import this file directly with space delimiters...but I use Unix utils on my Window box to make it a bit easier...
cut -f1 -d" " dumpfile.txt >dumpfile.csv
Then just type "dumpfile.csv" and Excel will come up and load it.
Plotting the values was showing lots of excursions above 10ms when sample rate for Primary was 192kHz
Dropping the rate to 48kHz cleaned it up a lot with much fewer +10ms excursions and the signal was a lot cleaner.

I'm showing a consistent 1% loss on UDP packets (not surprising) at a UDP throughput of ~800Mbps
TCP throughput is ~6000Mbps with 0% loss of course so over 7X better.

I'm starting to think we need to use TCP for the rig audio instead of UDP.
Is there any reason not to use TCP? It's a bit more pain on the connection management but not too bad.

I wonder if any of the Ethernet adapter settings, such as UDP Checksum Offload, or others, affect the UDP loss rate?

For the most part I don't have any problems working weak stations on FT8 - that wouldn't have any direct impact I wouldn't think - if you were concerned that your xmit was affected, which is what this has been about, then it would be to have someone pick you up if you were weak and not the other way around. Or at least I think you're suggesting this.

At this point I don't know if we are all talking about the same kind of "glitches".

There are glitches caused by lost audio samples in the virtual audio connection. I occasionally see/hear one of those, and they do happen. These can be minimized by proper VAC setup: matched sample rates, proper buffer sizes, etc. In the near future there will be a release of PowerSDR that implements a sophisticated resampling algorithm on the VAC interface to allow for the fact that the PC audio clock is not the same as the radio audio clock. The resampler effectively eliminates under and over flows on the VAC buffers.

There are glitches caused by lost Ethernet packets. I also very occasionally see one of those (I'm using a beta version of PowerSDR that lets me detect the difference between these and VAC related lost samples), and they do happen. These can be minimized by making sure your PC does not have a lot of traffic on the same NIC, and by lowering your RX (not audio) sample rate. And, yes, at this point I would agree that TCP/IP would have been a better methodology. However I don't think we are going to see a wholesale re-write of the software and firmware to do that. How this can be most easily solved in the future remains an open question.

And, finally, there are glitches that are caused by the phase transition between one tone and another in JT and FT modes in WSJT-X. These are most easily seen in JT modes because they are so much slower. These I see on every single tone transition. They are really there. I've spent the afternoon studying them, using both VAC (the latest, 4.50) and VMB (also the latest), and at matched sample rates (48KHz) and unmatched sample rates (96KHz). I've observed them to be identical in both PowerSDR, Spectrum Lab, and Reaper (digital audio workstation software). They remain the same regardless of VAC software or sample rate. In short they are really there as far as I can tell.

I was a bit surprised because I can look at audio on a sample by sample basis in Reaper, and the transitions between tones are very nicely done in a phase continuous manner. However, the slope does change instantaneously, if ever so slightly, and these instantaneous transitions do create energy across the audio spectrum.

Here they are in a DAW based spectrogram tool:

Here they are in PowerSDR. Note that exactly HOW you set up your panadapter and waterfall in TX makes a BIG difference in how these appear. I typically look at +20 to -70 on the TX panadapter because if it's below -70dBc I just don't care. I normally use Hann windowing on the FFT for phone, but Kaiser seems to paint a better picture for digital mode transmissions. And I use a relatively narrow FFT bin size, 2.93Hz.

This example is at about 100W, as seen in DUP mode via my external coupler. 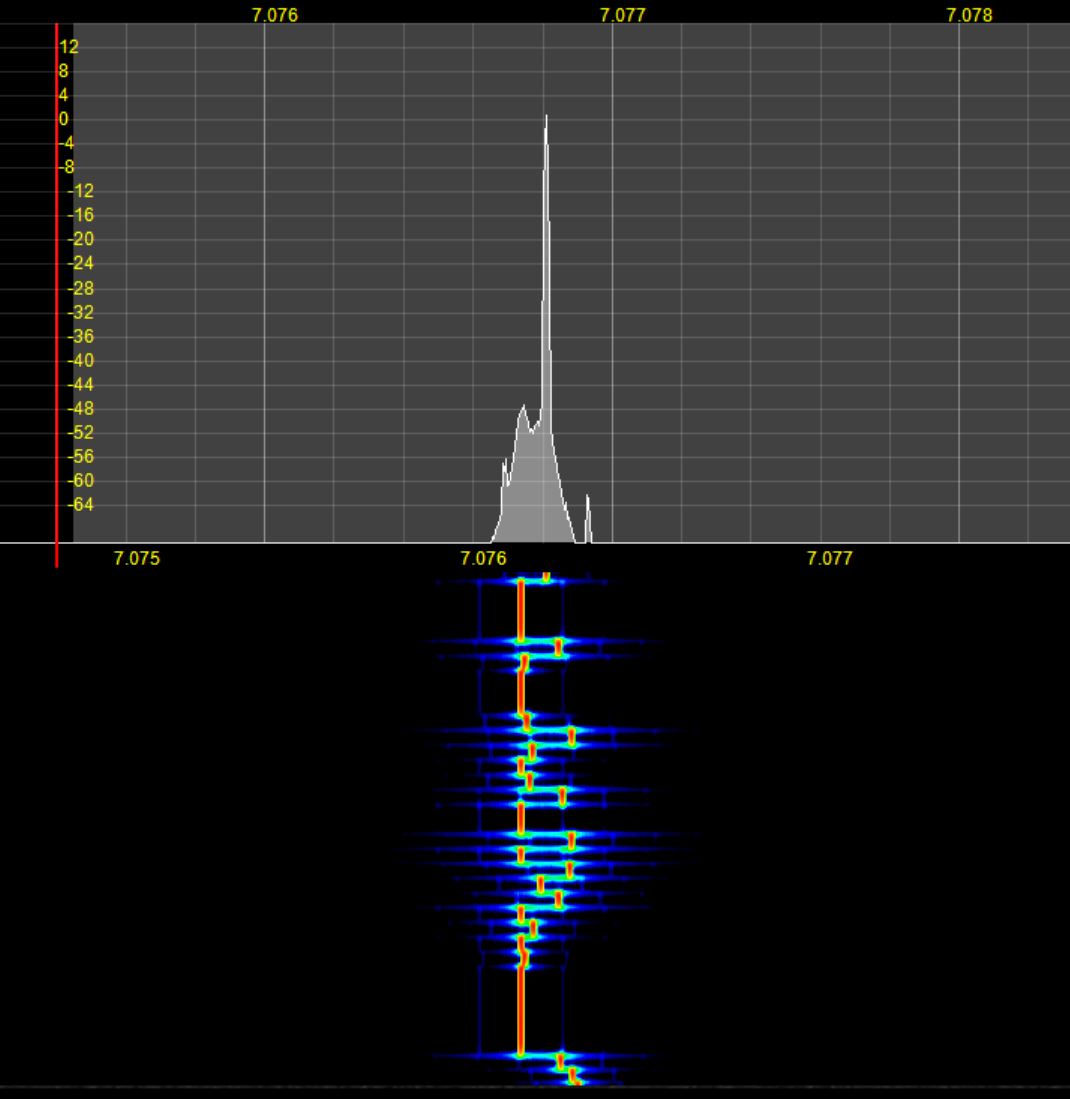 As you can see, the larger the jump between tones, the larger the glitch is, which makes sense because the phase slope discontinuity will be greater in those cases. These glitches I don't think you can do anything about. They appear to be inherent in the FT and JT mode waveforms.

FYI...I just switch from Muzychenko to Voice Meter Banana and a lot of the dropouts from WSJT-X went away...not completely but LOTS better.
This is the same thing Glen said he noticed too.

Reducing Primary VAC to 48kHz and 48kHz everywhere else solved the PowerSDR->Rig dropouts.