After a long time experiencing some mouse frustration, I picked up this neat looking and compact midi unit on closeout at a local music shop here in PEI. I've managed to set up a number of functions that seem to work very well, but have run into a problem. I started on the right half of the control board, since my operating hand (right) naturally falls to that side. Put the VFO A on the right wheel - no problem. Assigned buttons for some often used functions along with sliders for others, again no problem. When I ran out of right side control I tried to add more to the left side, only to find the left side "mirrors" the right side, more or less. So, no new commands/programming of these controls worked.

This particular unit has some settings in the middle controls that appear to affect functionality among/between the left and right selections, but I've not been able to figure out how to make them independently addressable, so they don't just mirror each other. Has anyone tried and figured this out?

I went to Numark.com to try to get a detailed map of the midi output commands to figure out what settings let them work independently, but can't find such a map there. So hoping someone else has experienced this duping of functions and can tell me how to get all the controls working so I can use both sides.

A secondary issue is that some of the buttons on the right side are "seen" as activating the same function. E.G., if I assign NB2 ON/OFF to a button, another button on that side does the same thing! This is less a problem than being unable to use the left side for different functions, but would be nice to "disconnect" those as well.

Have you tried each of the 4 different pad modes?
Top

Hi Scott, yes, sort of. They enable the buttons flanking the center of the unit 1-4 to be more or less independently assigned to (at least the first two) of the four modes. But other controls and all sliders and knobs are unchanged by mode.

I may keep it anyway, as I've addressed several of the biggest irritants of having only mouse control, to wit: now can control AGC-gain, IF Shift, and Main Volume with knobs/slider, and can VFO-A tune and button lock the wheel if I want to. Also a button for NR2 and Filter selection up and down, and a tune and PTT button. More would just be nice and maybe enhance second rcvr opns, but this is already good. The PTT button on right bottom lets me have my keyboard cursor on the other monitor, so that's nice too. All for 70 bucks and change.

I use Hercules DJ Control Compact. It works 100% and looks to be about the same size.
Top

w-u-2-o wrote:I use Hercules DJ Control Compact. It works 100% and looks to be about the same size.

Thanks, it looks very similar. They will let me return this one if I can't make it work, so maybe the Hercules would be easier.
Top

I had to use 'bome midi translator' to get my DJControl Starlight to work correctly. There is a trial version so you might be able to look at the midi messages coming out. You might be able to convert/tidy them as I had to do with the touch pad areas of the deck knobs on the starlight. Saying that, those 'mode' buttons might not be trappable and handled internally.

Thanks Richie! I believe the mapping is indeed internal and not adjustable withou some kind of external program/editor, which is an expense and learning curve I wish to avoid. I'm making some progress with adapting the Numark unit to my needs now and will post a summary of my results here soon!

w-u-2-o wrote:I use Hercules DJ Control Compact. It works 100% and looks to be about the same size.

Thanks, it looks very similar. They will let me return this one if I can't make it work, so maybe the Hercules would be easier.

The Hercules will be much easier. It just works, all except for one button, which is the right hand button "1". However, you can the "mode" button in concert with the white keypad buttons to switch between four modes. In each mode you get four unique MIDI messages from all of the white buttons. Hence you can, if you wish, program up 4 commands per white button, accessible by switching controller modes (loop, FX, sample, cue). So you could have one set of buttons for running CW, another for SSB, etc.
Top

I've finally shaken out the Numark DJ2GO2 mostly, and determined a configuration that suits my needs. First, summarizing my findings:

- This midi interface natively sends the same midi commands from many of the controls, left and right. I've not found a resident toggle switch for these control, and presume they require an external midi command editing capability to modify. These mirrored controls include both large wheels, three of the four top level knobs, the headphone buttons on boths sides, and the sync, cue, and play buttons on bottom left and right. Also both volume sliders L/R are duped.

- There are 4 buttons on each side that can be toggled through the four selectable pad mode selections in the center of the board to enable 16 discrete button selections.

This may make this unit, at least in native configuration, a "non-starter" for many. I chose to see what utility I might make of this, and proceeded to set up some test configurations to see what is needed. First off, my primary goals in purchasing a midi controller for my 200D were to gain "knob" control for several of the Anan's functions, and to also be able to select on/off functions for some of the buttons I frequently find myself having to "mouse" for during operations. The most needed "knobs" were: AGC Gain (I use AGC off a LOT for weak signal low band DX work, and loud stations blast out the receiver, so I have to "ride gain"), IF shift (it's a pain to move any slider with a mouse! and when you need to minimize an interfering station, you need it now), and RIT (another big pain to use a slider for!). The main volume control (either Master AF or RX1) rounded out this group of needed knobs/sliders.

I've made use of a good bit of the control duplication into the DJ2GO2 for my needs. I also chose not to use the wheels for anything, as the natural tendency to use them for VFO control backfired when I constantly bumped myself off frequency while reaching for other knobs and buttons. I actually prefer, by far, to select frequencies on-screen with the excellent Logitech mouse with center wheel. This has become second nature tuning for me, and knobs/wheels are completely obsolete for me for main tuning. I've only programmed two levels for the eight pad mode buttons, and still have two spares to program, for which I'm keeping a "vote" for candidates (right now the leaders are A<>B and A>B).

Again, this is what works for me, and it won't be what everyone else needs, but I decided through trials that I didn't need many controls on the midi at all, and have actually come to appreciate the "bilateral symmetry" of controls like the PTT (Mox) and main volume, since my hand may be nearer to one or the other when I need it. So, to summarize, this midi controller performs all the needed functions with a minimum of fuss to enhance the most needed controls for PowerSDR for me. 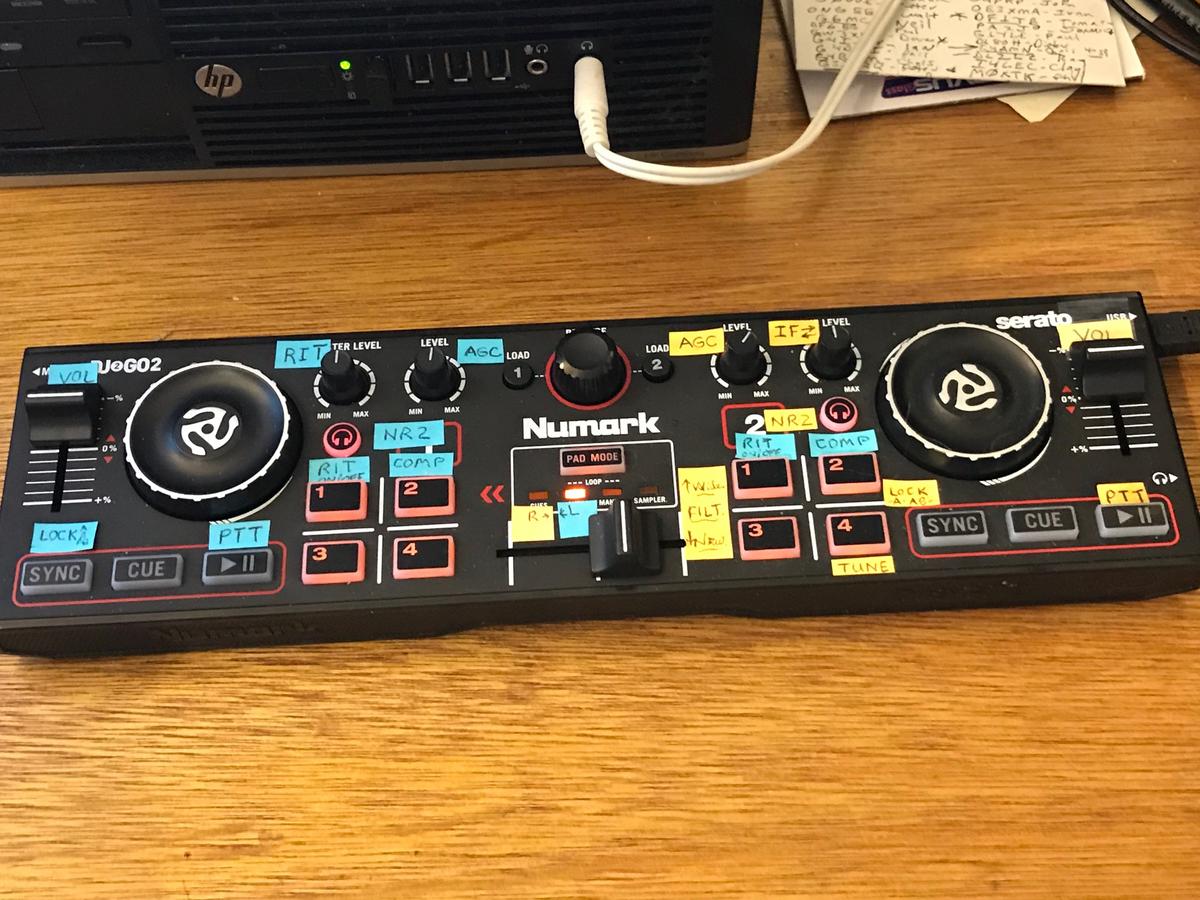 Why don't you just buy a Hercules DJ Compact so that all of your controls work? They are only $70 on Amazon.

You can run more than one MIDI controller simultaneously, if you want more controls.

And a label making machine helps, too

That's nice - and a neat job labeling it!

Maybe I'll play around with other midis later, but the one I have does all I need it to. As I wrote in the post, most of the features are superfluous or dysfunctional for me on the midi, and there's no need to duplicate them. Simpler is better! (labels are temporary until final config, btw)
Top
Post Reply
11 posts • Page 1 of 1